My interest in automation came early in my youth. Around the age of 13-14 I mounted light inside the nightstand drawer

in my room. It worked like the light came on if the drawer was pulled out and it worked well!

Home automation is “The Internet of Things” or IoT. The way all our devices and household items are connected to networks to give us seamless control over all aspects of our homes and buildings, etc.

In retrospect, I’ve made two plugins to HomeSeer to control Broadlink’s devices directly through HomeSeer.
It is the RMIR plugin that controls IR and RF signals from RM Pro, RM3mini (Bean) and others.

and RM Tasker plugin that controls and monitors sensors and switches on Broadlink A1, MP1 power strip and SP3 switch.
And the temperature sensors at RM Pro ..

These software modules are available in our online store together with the EcoFan module.

As you can see, I am now a dealer of this equipment I have used to set this up, with few exceptions.
The HomeSeer licenses may so far be purchased online via their website.
We have developed two MQTT programs to get data from Netatmo Weather Station and Netatmo Healty Home Coach.
These two systems from Netatmo are so different and they have to have their own program.
But the result to the MQTT broker is still quite similar. 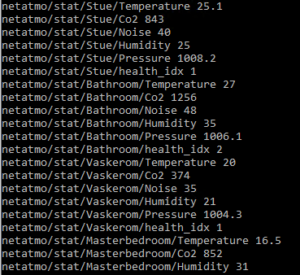 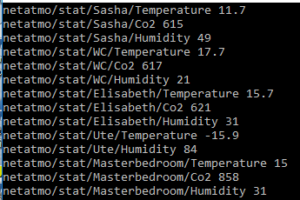 To the left is the result of Healty Home Coach and to the right result from the Weather Station.
The data published to the MQTT broker can then be used for controlling the automation system.
It can be anything from control of ventilation and heat and I don’t know what, only the imagination sets limits here.
These two programs can be found in our online store.

We have tried several different types of security cameras and have found that Arlo delivers good wireless cameras that meets most needs. They have everything from weather-resistant UHD, HD , 4g HD cameras and baby camera. All of these can be controlled from the Cloud and IFTTT, and now from most automation systems with our MQTT module. 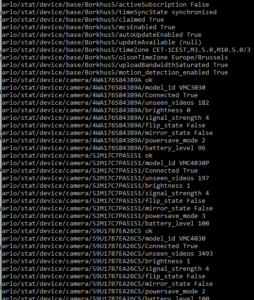 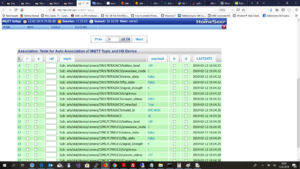 Arlo Cameras and Base with Mqtt into HomeSeer Hs3 with the help of mcsMqtt plugin. 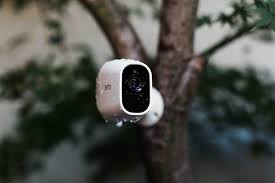 With IFTTT, Arlo collaborates with other systems such as Ring Video Doorbell.
This is a doorbell with video and two-way sound that also register motion outside your door.
With an IFTTT rule, the Arlo camera begins to record if Ring Doorbell discovers movement outside when we’re not at home. I have already caught the neighboors cat outside.
With Arlo Smart Premier subscription for about 80 nok a month, you get up to 10 cameras and 30 days of video storage each month.
This subscription hates extended detection  that it distinguishes between people, pets and cars. Also, it has activity zones that you can set up in the camera range.
This has Netatmo’s outdoor camera also, so you don’t have to turn on the burglar alarm due to a dog or moose roaming over the property. Have not been tested against moose yet by the way ..

Ring Doorbell is useful both when you are at home and when you are away. In either case, one can see who is outside and one can also talk to the person in question. When I am at home I choose to go to the door, but if I am away this is quite useful. Then I can talk with them as I was at home or not. 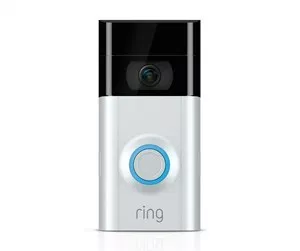 Since I have an office in the garage I have a Ring doorbell there if any call
at the house I get a pling inside the office as well as on my mobile.
The same doorbell is also inside the house and gives a message there with a nice sound.
For both Arlo and Ring I have ready programs based on the MQTT protocol, its now possible to store the videos on your own server and to embed them in your automation system in a better way than with IFTTT. 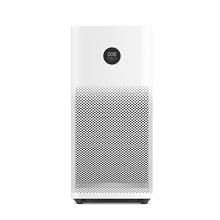 Xiaomi got an air purifier we also offer in our webshop.
The Airpurifier 2s makes your indoor climate healtier
together with the Blauberg Heat Exchange units.
The Mqtt program makes it possible to hook it up with an automation system which supports the Mqtt protocol. 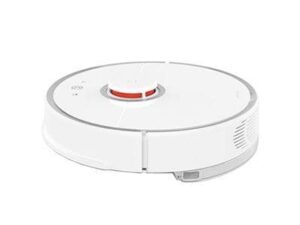 Xiaomi Roborock S50 has also its own MQTT program.
Our Mqtt program har 3 additional functions which are not included in the Mi Home App:

1. Pre-defined zones give you the possiblility to run the command “Clean the kitchen” or “Clean the hall”.
You can define up to 10 zones like this..

2. The multi command option “clean the kitchen and the livingroom” where these zones are a combination of the predefined zones..

3. Waypoints give the possibility to define 10 points in your house where you want the vaccum to go.
If you want it to meet you by the door when you arrive home or you want it to go to the dust bin besfore it go back to its home under the couch.

We have tested voice control of the Roborock S50 and have had the best result with Alexa. Alexa does not currently support Norwegian language, but this probably comes afterwards.
Google Home is more troublesome since they only have ON / OFF commands and you need to customize the name of the devices and events so that the commands go to remember. But ends up with commands such as “Hey Google, Apple TV on TV ON” etc. Not much to boast of … Below is a screenshot of the commands from Alexa after they are made more understandable in ‘routines’. 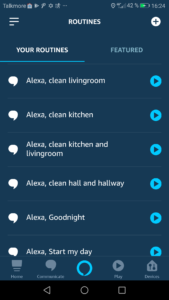 After all, you have to have some fun . Set up a waypoint by the fridge and one by the couch. Thus, it was the setting for a new routine.
By posting an event I called “Get drinks” in Homeseer where the Roborock first went to the fridge and waited there for 30 seconds so that the wife could put a glass or a box on it, and then take the straight road to my place on the couch, wait 30 seconds here, before returning to the charging station.
At Alexa I scanned for new “Scenes” where the HomeSeer event takes place. Then the new event came in and I then created a new “Routine” on Alexa which was also called “Get drinks”.
After adding an action to say “ok master!” and run the event (stage) “Get drink”, it was time to test out.
And it certainly works! 🙂 Will be nice to have it for the next World Ski Championship! By the way, it was the wife’s idea to set this up!
Otherwise, I created a routine I called “Come to Dad” where the Roborock answers sweetly “Roger that!” and rush to the living room by the couch. Can be nice to have if you want to impress the coffee guests!
But now the wife wants another routine that brings her coffee where she sits studying in the office.
So then I just have to move around programming again! 🙂

I also mounted an Arlo surveillance camera on the Vaccum robot. The idea is that then the robot can scan the house and see if everything is fine when we are away. It will also listen for abnormal sounds and give alarm if certain limit values ​​are exceeded.
With an Arlo Smart Premier subscription, the camera can distinguish between humans and animals, so if the cat is loose and gets in the way, the robot can stop and the same applies to humans. Yes, if you are not at home, the robot can even sound an alarm and it detects people. Then you can get a push message and trigger a siren in the house at the same time. The possibilities are limited only by the imagination.
It may be a good idea to link this to our robot management software (miiorobo2mqtt) to get the above solution. 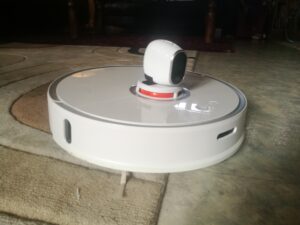 Easy to mount on the top of the vaccum cleaner with velcro tape.

Over a small round in the house with the robotic vacuum cleaner with Arlo HD camera.
This allows for even more intelligence if you combine our Mqtt program for both Arlo and Xiaomi Version 1 / S50 Mqtt program.
Only the imagination sets the boundaries. 😉
Xiaomi Air Humidifier 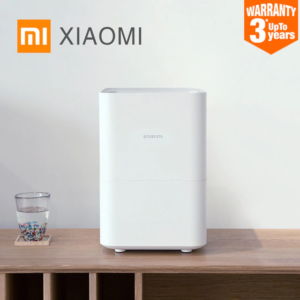 Xiaomi also has a humidifier that is suitable for us heating our house in winter. The air tends to be very dry inside and it is noticed on the skin and eyes. That’s why I’m going to try to keep the humidity between 40 and 50%. And it can be achieved with the help of Netatmo’s Healty Home sensors that can signal to the automation system when the limit values are reached. We have not yet started the development of the Mqtt programs for this unity it is still in the mail.Xiaomi Water Purifier. 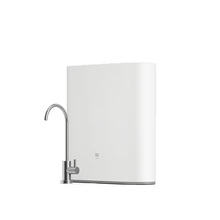 We have plans to create Mqtt control program for this unit also. Many struggle with poor quality drinking water, smell, taste and color. It can also remove bacteria with osmosis and coal filter. With the control program, it will be possible to give notice whether there is time to change the filter or a limit value is exceeded.

Here is a link to several free mqtt modules,
which can be used for controlling Philips Hue Light, Broadlink units etc.
https://github.com/owagner?tab=repositories

I mounted an Arlo surveillance camera on the Worx robot mower. The idea is that then the robot can scan the house and see if everything is fine when we are away. It will also listen for abnormal sounds and give
alarm if certain limit values ​​are exceeded.

My choice was a Worx robotic lawn mower, Landroid S300, which
claimed to be the most intelligent on the market today.
Well, it says a lot about your competitors you ask me. 😉
Compared to Xiaomi’s robotic vacuum cleaner, this one seems far less intelligent since it doesn’t
mapping the garden or managing to control exactly where you want it ..
Xiaomi also has a standard sensor that detects something is in its way, and at Worx this is
enhancement. well well. maybe in the next version of the firmware?

To install it into the automation system you need to install
iobroker, which is a driver, on a free computer in the house.
Then you need to download the adapter for this series of lawn mowers:
iobroker.worx adapter, and install this. Search it on google.
Nb! It is not pre-installed on iobroker (for older Worx lawn mowers).
Once installed, you must also install the Mqtt client adapter that is in the iobroker directory, if you do not have a Mqtt broker running you can also choose to install a combination of client / broker adapter that is also in the iobroker directory.
Both of these adapters must then be activated inside the iobroker to get an instance (running program).
To extend the use of the robot, I mounted an Arlo HD camera with sound on top of it.
So now it can look after the property while I’m away! Combined with our proprietary mqtt control and monitoring program (arlo2mqtt) for Arlo camera and an Arlo Smart Premier subscription, this is a hand in glove situation.
The Smart Premier subscription opens for notification if the robot detects humans, animals or cars and distinguishes between them.
From there, it is really up to everyone to create rules that create the most sensible scenario for use. For example, you can stop the robot if animals or humans get in the way!
Then maybe you can start talking about intelligent robotic lawnmower? 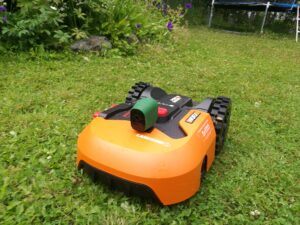 Arlo HD camera with sound mounted on with Velcro.

By continuing to use the site, you agree to the use of cookies. more information